It is relatively straightforward to calculate the CO2 emissions of a flight, as it is directly related to the amount of kerosene jet fuel (referred to as ‘jet fuel’) burnt. Yet, assigning the emissions to a single passenger requires taking into account several factors, the most important are:

Flight distance is an essential factor in determining jet fuel consumption. Generally speaking, the farther the route, the more fuel burned. However, since takeoff and landing demand higher fuel burn rates than level flight, shorter routes where takeoff and landing comprise a larger portion of the overall flight tend to be less efficient (i.e., require more fuel per kilometer). Takeoff and landing are smaller portions of the overall flight for medium range routes, so they are generally more efficient. But, over very long distances the fuel use per mile increases because of the greater amount of fuel that has to be carried during the early stages of flight.

To calculate route length the great circle distance (the shortest distance between two points on the globe) between two airports can be used. Since an aircraft’s route is normally not an exact match with the great circle calculation method due to flight path routing, detours around weather, and delays due to air traffic, it is good practice for calculators to add an extra amount to the overall distance. 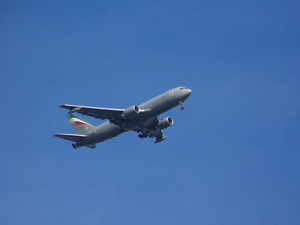 Jet fuel consumption varies considerably by aircraft model and engine type. To calculate per passenger emissions it is possible to distinguish between aircraft model or to use average numbers. 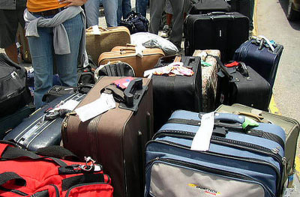 The majority of a flight’s total weight is the aircraft itself and the fuel it carries. ‘Payload’ is defined as the weight of the people and items that are being transported, including passengers, their luggage, and cargo.

Usually emissions are assigned to cargo and passengers based on their percentage of total cargo weight. For example, if 80% of the payload weight is passengers and 20% is cargo, then 20% of total flight emissions are subtracted from the passengers’ carbon footprint.

For each passenger an industry-wide standard of 220lbs (100kg) is assumed including their luggage. An additional 110lbs (50kg) per passenger is added for passenger infrastructure such as toilets, galleys, and crew.

Passenger to cargo ratio can vary greatly, on intra-European flights passengers make up more than 96% of the payload, on Europe-Asia flights they make up 64 – 80% (ICAO 2017). It is good practice for calculators to account for cargo load based upon historical data.

Emissions per passenger depends on how many passengers there are. Longer flights tend to be more efficient (fewer emissions per passenger-kilometer) because these flights use larger aircraft with higher seating capacities (BDL 2015). However, not all flights are fully occupied. Seat occupancy rate (also called passenger load factor) is the ratio of passengers to available seats onboard a given flight.

On a flight with low occupancy rates, the total emissions have to be divided by fewer passengers resulting in a higher per-person CO2 footprint. Usually, emissions calculators use average occupancy rates by the air carrier.

Seat class is a key factor in determining the emissions an individual is accountable for on a given flight. A plane that is configured with all economy-class seats accommodates the highest number of passengers. First- and business-class seats take up more space and therefore fit fewer passengers. This means first- and business-class seats are assigned a greater proportion of the overall plane’s weight. Emissions should therefore be allocated to passengers according to their seat class. These cabin class weighting factors can be calculated for each aircraft type. A multiplier of about 1.5 for business class seats and of 2 to 3 for first-class should be used. Calculators may distinguish between up to three tiers of seat class.

Taking all of the above factors into account, jet fuel consumption per passenger tends to vary according to distance and occupancy rate. For illustrative purposes, average fuel consumption is about (BDL 2015):

…before applying any multiplier for seat class.