Contrails and Cirrus Clouds from Aviation

Clouds can have either a cooling or a warming effect: 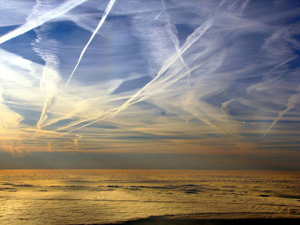 Contrails are linear ice clouds formed in the wake of aircraft. Contrails are formed by soot aerosol particles and water vapor emissions, that allow background water vapor to condense on the soot aerosol particles to form ice crystals. Whether contrails form depends on the flight altitude as well as on the temperature and humidity of the atmosphere. About 10 to 20% of all flights cause contrails, and they are short-lived.

The warming effects of contrails are different during the day than at night. During the day, contrails trap infrared radiation (a warming effect) and reflect solar radiation (a cooling effect). At night, they only trap infrared radiation and there is no cooling effect. Because contrails are short-lived, formed in areas of high air traffic density, and can affect existing cirrus clouds, they may cause local or regional climate responses. Globally, contrails have been found to have an overall warming effect (Lee, 2018). The effect is so large today that it exceeds the total warming influence of all of the CO2 emitted by aircraft since the beginning of powered flight (EESI Fact Sheet, 2019). 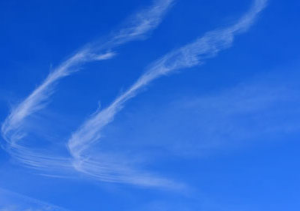 Under certain conditions, contrails can result in the formation of cirrus cloud cover. Cirrus clouds are composed of ice crystals and occur above 6 km, covering approximately 30% of the Earth’s surface. On balance, they absorb solar radiation and lead to warming. Air travel-induced cirrus clouds therefore significantly increase the climate effect of flying. Research shows that the influence of contrails and cirrus clouds on the climate is growing significantly, but that it is still difficult to model the overall effect well (Bock et al 2019, Tesche et al 2016).