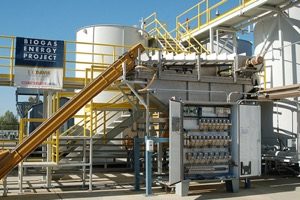 Methane’s global warming potential is over 30 times greater than that of CO2 over a 100-year period. Methane is produced and emitted by landfills, during wastewater treatment, in natural gas and petroleum systems, from agricultural activities (livestock and rice cultivation), and during coal mining. Methane is basically ‘natural gas’ and can therefore be captured and used as a source of energy.

There are two types of methane projects. The first type captures and burns (flares) methane. Through combustion, methane gas is turned into less potent carbon dioxide and water. Examples of such projects include the capture and flaring of landfill gas and of coal mining gas. The second type of project captures methane and uses it to produce either hot water, electricity, or pipeline-quality natural gas that is direct injected into the common carrier pipeline. Such projects include those that capture and purify methane in wastewater treatment plants, livestock anaerobic digesters, or landfills and use it for electricity production or the production of another form of energy.

It is usually quite easy to establish additionality for the first type of methane projects because there is generally no other source of revenue from the activity aside from the sale of offset credits. Yet, methane offset projects could potentially create disincentives to regulate landfills and agricultural emissions (e.g., from manure lagoons). If methane capture and destruction projects become profitable through the sale of offset credits, there is little incentive for project owners to support legislation that would mandate capture and destruction. This issue of perverse incentives could stifle more effective regulation is not limited to methane project but holds true for many offset types and potential regulation.