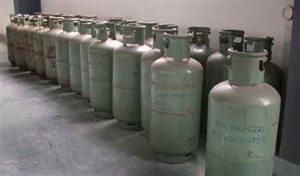 Some industrial gases have very high Global Warming Potentials (GWP). A high GWP means that an equal mass of gas causes much more global warming than CO2 over a period of time, typically 100 years. The destruction of these gases before they are emitted is therefore a very effective way to reduce GHG emissions. Industrial gas offset projects are frequently the cheapest to conduct and generate large numbers of offsets. However, they are controversial because they deliver limited additional environmental and social benefits. Few disagree that high-GWP industrial gases should either be destroyed or not produced in the first place, but the offset market does not appear to be the best way to reduce these emissions. The creation of an offset market for HFC-23 gases has produced perverse incentives in China and India to start building new HCFC-22 facilities to increase revenue from offset credit sales (HFC-23 is a byproduct of HCFC-22 manufacturing). Many balk at the idea that heavily polluting industries such as these should be rewarded for the destruction of gases that should not have been produced in the first place. Furthermore, some research has shown that establishing an international fund to finance the capture and phasing out of HCFCs (via the World Bank, for example) would be much more cost-effective than reducing these emissions through the offset market (Wara, 2007).

Note that in 2016, countries negotiated the Kigali Amendment to the Montreal Protocol, which will phase out the high GWP HFCs that replaced ozone-depleting substances, such as CFCs and HCFCs. The Kigali Amendment entered into force in 2019. Because HFCs are now being phased out under an international legal regime, they may no longer be considered additional in the coming years.