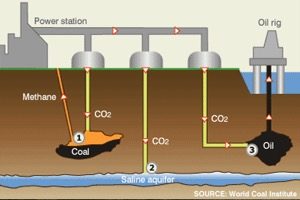 CCS refers to projects that capture CO2 emissions from emissions sources, or directly from the air (direct air capture) and inject them into an underground geologic formation such as active and abandoned oil and gas reservoirs, saline aquifers, or un-minable coal seams where they are stored. CO2 is also a marketable commodity and therefore captured CO2 may not be stored in secure reservoirs – instead of making its way to various markets. These instances of CO2 capture are either not viable for offset crediting because the CO2 is later released to the atmosphere, or their additionality would come under question given the financial incentive of selling the CO2.

Although CCS has limited viability currently, CCS is increasingly considered an important tool for decarbonizing the electric power sector. It is controversial among some groups, however, for entrenching the fossil fuel industry and for eliminating emissions while not providing any co-benefits to their local community or region.

CCS has also been proposed through large-scale marine projects such as seeding the ocean with iron, which would increase CO2 uptake. Such large-scale projects carry significant ecological risks and are not currently viable.

The World Wildlife Fund has issued the following guidelines:

Other groups, such as WRI, have articulated key principles on CCS and the Global CCS Institute has resources available to learn more.